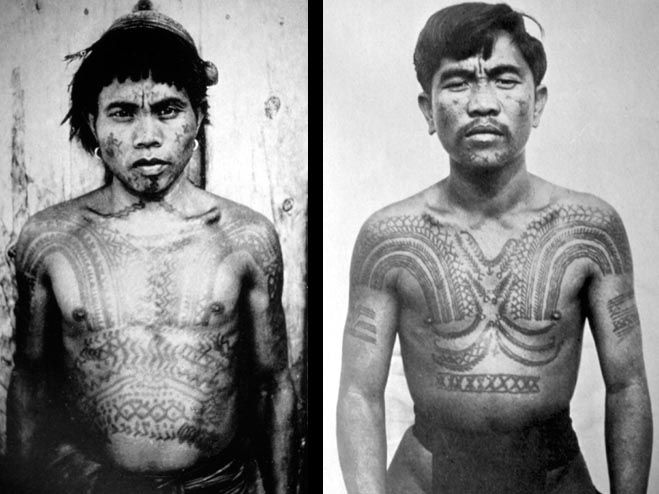 The Filipino tribal tattoo is something that has a very rich history going back to pre-hispanic times. While much less known than say Maori tattoos historically they offer almost as much variety and are now making a huge comeback on the tattoo scene.

Background to the Filipino Tribal  Tattoo

“the Islands of the Painted Ones”, as much like in other parts of Asia and the Pacific the locals were decorated with all over tattoos.

This did not fit in with the Christian beliefs of the Spanish colonizers and over the last 500 years the art has almost died out, with a few very notable accessions which we will cover later in the article.

The Tattoo Scene in the Philippines

As the grip of the Catholic church has dwindled in the Philippines, the acceptance of tattoos has grown somewhat. It is not uncommon to see Filipino guys and girls with some quality ink work.

Getting a tattoo can also be really cheap in the Philippines, again depending on artist. I have personally had two pieces of ink done in the country, one small set of writing on my inaner-arm, as well as a logo with a bit more color on the top of my back. Both set me back less than 30 bucks, neither though were a Filipino tribal tattoo.

They also used the tried and tested needle rather than the traditional “tapping” style of tattoo. Not heard of tapping? Its legit and it hurts.

How to get an authentic Filipino Tribal Tattoo

The Philippines is a huge place with multiple ethnic groups, the Kalinga tribe are one of the last peoples to still practice the ancient art of the Filipino tribal tattoo, within the mountainous region of the Cordilleras.

The maintains area is close to Sagada , home of the famous hanging coffins – another cool place to visit. Getting here is not easy and the final stretch involves a massive hike.

When you arrive there is one last lone practitioner of the Filipino tribal tattoo Whang-Od who is almost 100 years old has ben inking the men and women of tribe for the last 8 decades. While she has taught others this dying art, the prestige is still to get one done by her.

What kind of Filipino tribal tattoo can you get? This is the really cool part, you do not decide. She looks at you, asks some questions (via a translator) and then decides where and what tattoo you get. The ink she gives according to tribal traditions helps ward off evil spirits and protects you as a warrior in battle, be that the battle of life, to however you want to interpret it.

There are false stories that you have to be of Filipino heritage to get at tattoo with the famous artist, although from our experience “heritage” is a lovely applied term and going there with a chick is usually enough to qualify you.

This is still on my bucket list and would have occurred had Covid not kicked the bollocks out of travel.

If you do want to travel there when things finally open up then check out this travel company – they visit Sagada and can arrange bespoke trips to get a tattoo here.

How do they do the Filipino tribal tattoo?

There are many non-inked people that don’t get tats because they are too scared about how much it will hurt. I won’t go on about how ridiculous this is, even my 72 year old dad manned up and got one a few years ago. The reality is that with modern methods tattoos do not hurt.

Getting a tattoo with the Kalinga headhunter tribe though does legitimately hurt, there are no sterilized needles here, this is done by the traditional tapping method. The method dates back thousands of years and involves charcoal being hammered into the skin using the spike of a calmansi (lime) tree attached to a bamboo stick that has been dipped in wet charcoal. This is for the experienced tattoo guy, or gal, not for the faint hearted.

Can you get a regular Filipino Tribal Tattoo?

Of course trapping across  the planet to get a Filipino tribal tattoo is difficult at the best of times, but during the pandemic is literally, rather than figuratively impossible.

The styles though can be easily replicated with a standard tattoo parlorr and the general Filipino tribal tattoo genre is seeing a renaissance throughout the world, largely driven by the Filipino diaspora, which are literally everywhere. Another point of popularity is that they have traditionally been for both sexes and there are some great designs that great on women, if that’s your thing…

Being a thousand year old practice theres literally thousands of variations of a Philippines style tribal tattoo, so narrowing down 10 is no easy feat. We’ve put down 10 that we particularly like – but hey get creative there are other designs online, or better still hit up a Filipino for some advice.

If you have time endurance and money then you can have your whole arm filled with these artistic and hazy designs. These need to be a little more thought out.

This are particularly in-style right now. Essentially it means taking an existing idea not related to the Philippines, but using the tribal style as the base of the ink work. How you do this is down to you, but we have even seen the iconic Lion With a Crown (link) done Filipino style.

Mots Filipino tribal tattoos do not depict actual things, but focus more on symbolism. An exception to this is celestial bodies like the sun and moon which look great when integrated with the Filipino style of tribal tattoo.

We have provided a decent amount of photos for this kind of tattoo. Essentially these are the styles that are worn by the actual tribe. These traditionally will take up at least your whole arm, or at least your upper arm. Tribal tattoos do not lend so well to smaller designs.

Wanna go all in? The tribe traditionally have ink all over their bodies, so it is possible to follow suit. Don’t worry we are not the PC brigade, this is paying homage not cultural appropriation!

Although we have previously said that Filipino tribal tattoos don’t led well to smaller designs, if you don;t want something huge that is down to you. The designs tend to have artistic meaning, so mall shoulder or tramp stamp designs are more than possible, particularly with some of the sun, or moon stylized designs.

If you want to be truly authentic, or to make this part of a bigger project then start with a half-sleeve. Basically in the tribal culture you start with he half sleeve and then the ink that fills the rest of your body follows from this. They also look dope and area  great alternative to the really overdone Maori style.